Something About the Solar Apex

The sun runs towards its point of settlement, that's the determination of The Almighty, The All Knowing. How a Quranic verse reveals itself 1400 years after its revelation.

The sun moves around earth. Or at least that was the belief until recent history. The sun is stable, it does not move. Again, that was the belief for some 200 years. Science has proved today that the sun indeed moves along with the galaxy in some very complicated manner.

There are four types of movement of the Sun: rotational, at a speed of 2 Km/s; orbital around the Galactic center, at a speed of 217 km/s; one towards the center of the galaxy, and a fourth newly discovered motion. The orbital movement of the sun is concluded once every 226 million years, which is the time referred to as a Galactic year. The sun already concluded 25 orbits during its lifetime.

The most interesting motion of the sun, however, is what is referred to as the local motion. In brief, the sun moves along with the stars in the galaxy towards a fixed imaginary point in space, located southwest of the star Vega near the constellation of Hercules, and is referred to as the Solar Apex. The sun's velocity towards its apex is estimated to be 20 Km/s. Vega lies 26.5 light years away from the solar system.

the sun jumps above and below the plane of the galaxy

The same article is concerned about the effects of the interstellar medium on the existence of the solar system. It points out to the fact that the sun has been traveling through an area of very low interstellar density (devoid of large, dense clouds) for several million years, and is not expected to encounter any large, dense clouds for at least several million years. The result of such an encounter is undetermined.

The article also points out that Homo Sapiens (ancestors of the current living human) appeared while the sun was traversing a region of space virtually devoid of interstellar matter.

The solar apex in the Quran 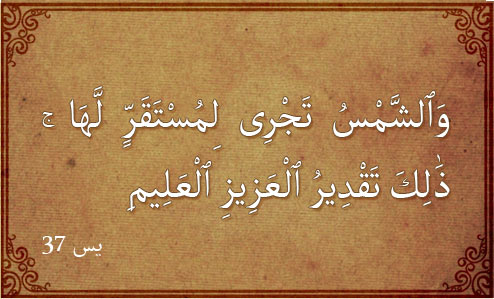 There is this told story (Hadith) of a man of Ansar who always read the Sura of Ikhlas (Qul Huwa-Allahu Ahad) along with any other Sura when he lead in prayer amongst his companions. He explained to Prophet Mohammed (Peace Be Upon Him) that he loved this Sura, and the Prophet replied to him that loving it has granted him paradise. Based on that, and on the fact that human beings are very diverse in nature and preferences, the Holy book of the Quran has so many angles. Each person has a defined angle, looking through it allows him or her to see what is inside with clear vision.

Today I would like to talk about my angle, my most favorite verse in the Holy Quran. I believe this verse holds many secrets, some of them have been revealed, and some are yet to be revealed. It is the tightest knot that binds me to my faith.

The verse in Arabic holds linguistic traits that make it nothing less of miraculous. Some valuable information could be lost in translation. The translation of the exact interpretation of this verse (given our current knowledge) is: [And] The sun runs towards its point of settlement [that's the determination of The Almighty, The All Knowing]. Other translations found included: appointed place, resting place, and stopping point.

Astronomers' definition of the apex gives it the quality of being the destination or end point. The verse refers to that as the settlement of the sun. It is possible that it is the solar apex as we know it, or it could be more tangible than just an imaginary point close to Vega. Not knowing the results of reaching the apex, nor discovering any previous paths, suggests this might be the only trip the sun is ever going to take.

The Quran refers to the movement of the sun using the word runs instead of moves or walks, indicating high speed and oscillatory behavior. I already mentioned that the sun jumps up and down irrespective of its rotation around the center of galaxy. The jumps are huge in amplitude, and fast.

The sun will not keep in motion forever

The word towards which indicates positional termination, also translates to until indicating duration termination. The sun runs until its moment of settlement. Some translations put it with the following words: fixed course for a term or a period, or course of its final destination. Astronomers did not determine the after-settlement, but agree that the sun will not keep in motion forever; at least not the way we came to learn during this lifetime.

Gaining a new point of positional settlement afterwards is possible, but science has a different reflection. Astronomers state that the sun's motion is occurring during what I would call the low times of the universe. Those are the times when the universe is not aggressive towards the solar system, starting from the moment of devoid interstellar matter, until the moment the sun collides with a high-dense interstellar cloud. They are also connecting the origination of life with the first occurrence of mass loss, which must re-occur after collision if life is to originate again. They have just described the end of life as Allah has taught us in their own fancy words!

the universe is unstable, it will keep in continuous motion until it finds stability

An additional interpretation lies in the word "settlement" which can also mean stability. As astronomers would put it: the universe is unstable, it will keep in continuous motion until it finds stability which lies in the collapse of the universe. That is pretty much the end as described in the Holy Quran. The term used in another verse to describe this event is folding the skies. [Al Anbeya, 104]

Those who go deep in trying to figure out the origin of life are merely studying the ways of God. If we pay close attention, we will come to better understanding of how great and perfect our Creator is.

Science is the code of God

According to astronomers, emergence of life considering the conditions was inevitable. So Allah orchestrated the perfect moment of stability in the universe before He determined life to emerge on planet earth. It might be true that man was meant to live during a window of time that Allah has prepared especially to serve the purpose of life. That window is described as low interstellar density period. The end of the universe could be the end of the human species alone, there is no indication as to what took place before our universe, or what is going to take place afterwards. We haven't been told, or have we?

All I know is that Allah did not create this universe randomly. Science is the code of God. And if we are such intelligent beings, we should learn few things from Him. As a matter of fact, every industry revolves around orchestrating perfect moments to serve certain purposes. We are already mimicking the ways of Allah!

The Holy Quran is not a book of science, it is much more than that. That being said, our interpretation of the verses above could still be incorrect. This is due to our lack of knowledge or misinterpretation. Thus here is a disclaimer to anyone who is reading this by the year 2400, I might be wrong!

This article is by no means for the purpose of bringing faith into those who do not believe in God, nor an invitation to Islam, nor a religious discussion. It is merely enjoying being on the same league of the One who taught us these words.

Off the record: I find the following information delightful! The name Vega comes from the Arabic word waqi meaning falling, via the phrase النسر الواقع an-nasr al-waqi‘, translated the swooping eagle—Wikipedia